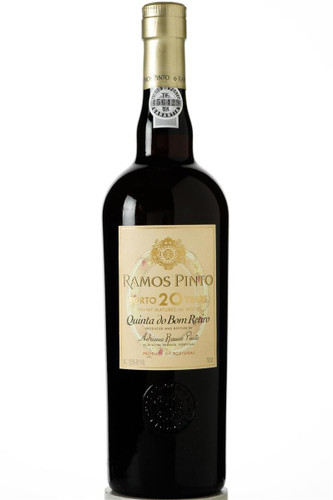 It is a blend with an average age of 20 years, made from a selection of several lots originating in one of the oldest vineyards in the Douro region - \"Quinta do Bom Retiro\".
The ageing and maturing experience in the wood change its colour. The red shades give place to brick and yellow colours, to the tones of a sunset.
It is an oenological creation from several different lots. Wines are easy to match when they are young but as they grow older the matching process becomes more difficult. Greater knowledge and fine tuning from both sides is required so that, over time, a perfect and long-lasting harmony is reached. Just as it happens with people.

Port is a fortified Portuguese wine. Produced from grapes grown and processed in the Douro Valley in Northern Portugal, distilled grape spirits are added to the wine during the fermentation process, increasing the alcohol content and halting fermentation before all the sugar is converted to alcohol, to produce a strong sweet wine. The different aging processes produce a variety of different types of port. The lighter styles, including white and tawny ports, can be served as aperitifs or cocktails, while the heavier styles, including Vintage ports, are commonly served after meals often with accompaniments of cheese, roasted nuts or bittersweet chocolate. The Douro Valley, established as a protected region in 1756, is the second oldest defined and protected wine region in the world. Both U.S. Federal Law and European Union guidelines restrict the label \"Port\" to products from Portugal. The Douro River Valley consists of steep hillsides with numerous microclimes created by the twists and turns of the River. The hot climate and difficult terrain encourage deep-rooted vines and produce grapes with intense flavor. Most ports contain a mixture of several different grape varieties and over 30 varieties of white grapes and more than 50 varieties of red grapes are grown in the region. Most of the wine travels through the port city of Porto, at the mouth of Douro River, for export, hence the name. The Port industry is regulated by the Instituto dos Vinhos do Douro e Porto (IVDP or Port and Douro Wine Institute). Port became popular in England in the early 1700s while war with France prevented the import of French wine. Various stories exist about the discovery of the fortification process, but the end result is that it greatly improved the shelf-life of the wine, allowing it to be exported without spoiling. The English have continued to be involved with the port trade and the names of many port shippers are familiar, including Cockburn, Croft, Dow, Graham, Osborne, Sandeman, Taylor, and Warre. The differing styles of port are a result of the quality of grapes used and the aging process, cask-aging or bottle aging. Cask aging, usually in wooden barrels, exposes the wine to oxygen allowing evaporation and producing a heavy intense port. These can be ready to drink after fining, filtration, and bottling. Ports designed to age in the bottle are generally aged in oak for a short period of time and then bottled, usually without filtration. They may age in the bottle for several decades before they are ready to drink. The sealed bottle allows little or no exposure to air and produces a smoother, less tannic product. Typical styles of port include Ruby Port, Tawny Port, White Port, Vintage Port, Late Bottle Vintage Port, Colheita Port, Aged Tawny Port, Vintage Character Port, Single Quinta Port, Garrafeira Port, and Crusted Port.

This tawny is a blend with an average age of 10 years. We are now entering the complex world of an a

Several battles were won with other types of tawny, but ultimate victory came within sight with the