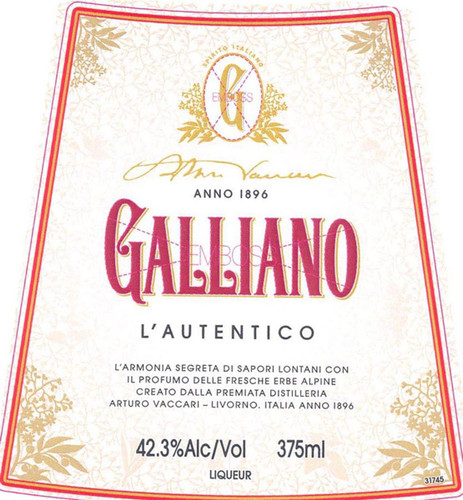 alliano, properly known as \"Liquore Galliano L'Autentico\", is a sweet herbal liqueur created in 1896 by Italian distiller and brandy producer Arturo Vaccari of Livorno in Tuscany. Vaccari named the spirit after Giuseppe Galliano, an Italian hero of the First ItaloEthiopian War at the end of the 19th century. Its vivid yellow color, currently derived from Tartrazine (a lemon-yellow azo dye), symbolized the Gold Rushes of the 1890s. Galliano is 60 proof (30% by volume). Among its approximately 30 herbal ingredients are star anise, Mediterranean anise, ginger, and citrus and vanilla. Galliano has a similar appearance to Strega (liqueur), another Italian herbal liqueur. Galliano is sweet and has a complex, vanilla-anise flavor with subtle citrus and woodsy herbal under notes. It is used both as a digestif (meant for drinking after heavy meals), and as an ingredient for cocktails, most notably the Harvey Wallbangers. The vanilla top note differentiates Galliano from other anise-flavored liqueurs such as Sambuca, Pernod, Anisette. Galliano is produced by first infusing grain-neutral alcohol with the herbal flavoring agents, distilling the liquid, and then infusing with pressed vanilla. In the final production stage, the vanilla-herb base infusion is blended with distilled water, refined sugar and pure neutral alcohol.

Makes nearly as much wine as France, but lags behind in their classification system. As a result, Italian wine isn’t taken as seriously as French wine. Most Italian wine is made from native grape varieties that don’t grow well elsewhere, such as Nebbiolo and Sangiovese. The most important regions are Piedmont, where Barolo and Barbaresco dominate, Tuscany, home to Chianti, Montepulciano, and the Super-Tuscans (a collection of relatively new reds), and the Northeastern region, where you’ll find Soave, Valpolicella, and Bardolino. Italy’s soils and climates are varied and ideally suited for viticulture, from the Alpine foothills in the north to the Mediterranean coast in the South. Its hilly landscape provides sun and cooler temperatures, even in the warmest regions. Italy has two categories of fine wines. DOCG, which means regulated and guaranteed place name, refers to a small group of elite wines. DOB wines are those with regulated (but not guaranteed) place names. A lower tier of table wines are grouped into IGT wines, which indicate the location on the label, and ordinary table wines, which carry no geographical indication except, “Italy.”

A fine brandy with a well balanced, smooth taste and distinctive French brandy character. St-Rémy us